Share
WhatsApp
Facebook
Twitter
Google+
Pinterest
Linkedin
Email
ReddIt
Telegram
Print
OrderPaperToday– Alhassan Ado Doguwa has been declared winner of Doguwa/Tudun Wada Federal constituency, having won with a clear margin in the rerun election conducted by the Independent National Electoral Commission (INEC) on Saturday.
He garnered 66, 667 votes to defeat his main opponent, Rtd. Air Commodore Yushua Salisu of the PDP who scored 6, 400 and was declared winner by the INEC returning officer, Mansur Dindawa.
On the contrary, Abdulmumin Jibrin of the All Progressives Congress (APC) has lost his bid to return to the House of Representatives to represent Kiru/ Bebeji federal constituency of Kano State.
Jibrin, who played a prominent role in the emergence of Femi Gbajabiamila as speaker of the House of Representatives, became popular when he accused the leadership of the 8th National Assembly of budget padding.
His contest for a third consecutive term in the Green Chamber was truncated in the rerun election which held on Saturday after he was beaten by the   candidate of the Peoples Democratic Party (PDP), Aliyu Detti Yako. Jibrin scored 13,507 votes against 48,601 voters polled by Aliyu. 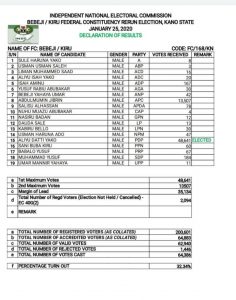 My Enemies Shopping for My Replacement, Saraki Cries Out

ABOUT US
Nigeria’s premier multi-platform media organization dedicated to reporting, tracking and archiving activities of the legislature as an arm of government for the digital age.

OrderPaper Websites & News Portals by OrderPaper Advocacy Initiative is licensed under a Creative Commons Attribution-NonCommercial-ShareAlike 4.0 International License.
Permissions beyond the scope of this license may be available at https://creativecommons.org/licenses/by-nc/4.0/.
Contact us: info@orderpaper.ng